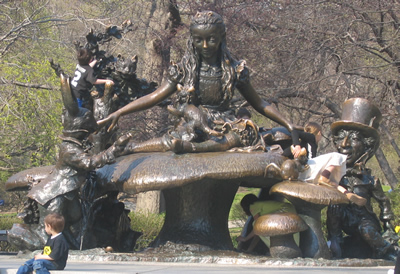 At the northern end of Conservatory Water you will find yourself at perhaps the least exclusive soiree in Manhattan, a party where everyone is the guest of honor 364 days a year. It is, of course, Central Park’s permanent installation of its very own unbirthday party.To honor his wife Margarita, Philanthropist George Delacorte commissioned the sculpture from José de Creeft in 1959. His design is patterned on the illustrations drawn by John Tenniel for the first edition of the book. Alice herself is said to resemble de Creeft’s daughter, Donna. De Creeft also included lines from Mrs. Delacorte’s favorite poem, “The Jabberwocky.” You can find them engraved in a granite circle around his work:Probably the park’s most beloved sculpture, it is a depiction in bronze of a group of our favorite characters from Lewis Carroll’s Alice’s Adventures in Wonderland. Perched stage center upon an enormous mushroom, Alice holds court. Grouped around her are the other unlikely invitees to the party. They include: The Mad Hatter (rumored to be a caricature of the patron that sponsored the piece), The March Hare, The Cheshire Cat, The White Rabbit, Alice’s Cat Dinah and, of course, the bashful Dormouse.

‘Twas brillig, and the slithy toves did gyre and gimble in the wabe

Besides being an intricate and engaging piece of modern sculpture the eleven-foot statue also possesses equal parts of warmth and whimsy. This is evidenced by the glowing patina created by the many thousands of tiny hands that have flowed over the characters for the past five  decades. It would seem that the only thing missing from the party is a twinkling bat.