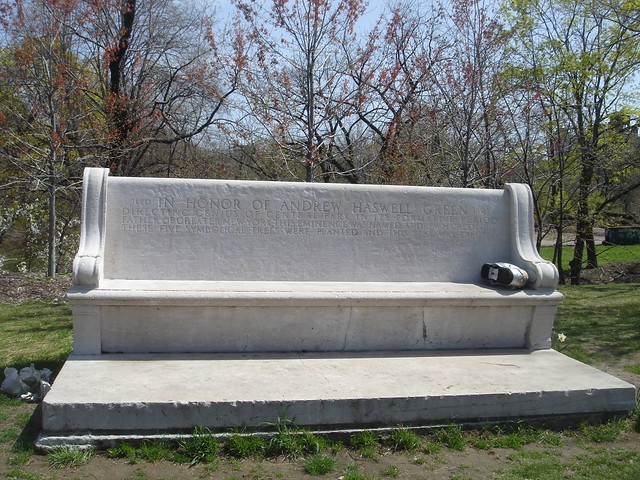 The Andrew H. Green Memorial Bench is at the crest of a hill overlooking what was once McGown’s Pass at 106th St.  Green, a New Englander who cherished Milton and enjoyed listening to Protestant hymns, shared Olmsted’s belief in duty, order, hard work, and efficiency. He was deeply attached to his family’s rural Worcester, Massachusetts, homestead (Green Hill) and had embraced Olmsted and Vaux’s pastoral aesthetic.

Only two years older than Olmsted, Green was, even his nephew conceded, “imperious … vain … parsimonious,” but he was “lavish” in his “unrequited work for the benefit of mankind.” The seventh child of eleven, at age fifteen he had left Worcester for the New York City mercantile world, where he became a real estate lawyer. He thrived as a Yankee Democrat who believed in both individual initiative and the leadership of the “best men.” In a family that produced ministers, doctors, teachers, engineers, and missionaries, Green had internalized a mission of public service, and he mastered the art of intimidation to achieve his ends. Faced with Olmsted’s relentless protestations of purity of motive and judgment, Green seems to have relished demonstrating that he was not only a better but a stronger Puritan. Inattention to accounts was a luxury that no man could afford.

It was Green’s vision, and attention to detail, that effected the changes in New York City that led the metropolis into the 20th century.