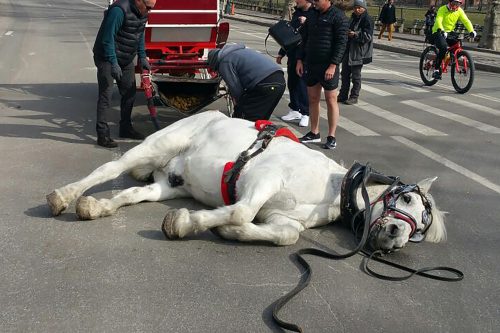 Throughout the year, tourists from around the world travel to Central Park to ride in one of New York’s legendary horse-drawn carriages. Yet the future of this industry is the subject of a highly charged debate being aired on the streets, in the press and at City Hall. Carriage operators say that horse-drawn carriages should stay because they are a cherished symbol of New York City that bring in tourist dollars. Advocates for animals say the industry should be banned because it’s inhumane and unsafe. They believe Hollywood has romanticized horse-drawn carriages and claim that life on congested city streets is anything but romantic for these nervous animals that are easily spooked.As a result of three dramatic and fatal accidents since 2006 that received international media attention, the plight of the NYC carriage horses is now in the public eye more than ever before. But the public doesn’t know much more than what they see on the streets and in the news.Through original footage taken with hidden cameras and interviews with carriage drivers, veterinarians, accident witnesses, animal rights activists, politicians, tourists, residents who live near the horses and people who have rescued NYC carriage horses from slaughter, BLINDERS takes viewers behind the scenes to expose the truth behind the tradition.