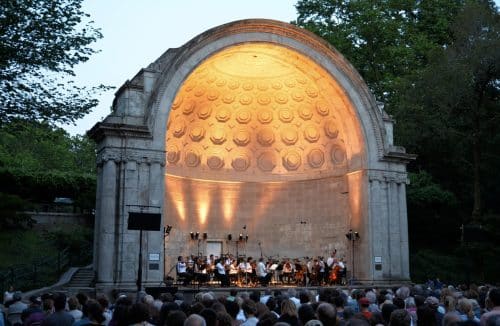 Standing at the edge of the Mall, just south of Bethesda Terrace, the Naumburg Bandshell has been home to an eclectic array of popular musical entertainers. Acts as diverse as John Phillip Sousa, Duke Ellington, Irving Berlin and The Grateful Dead have performed upon its stage to the delight of thousands of park visitors.

The Bandshell was originally built in 1923, funded by donations from banker Elkan Naumburg and replaced an earlier ornate cast-iron bandstand that had been designed by Jacob Wrey Mould. It stands at the edge of an area known as The Concert Ground, which was included in Olmsted and Vaux’s 1851 Greensward Plan. In 1922, due to the popularity of the musical diversions, the original Concert Ground was expanded to its current size. This, unfortunately, resulted in the loss of the filigreed metal bird cages, ornamental drinking fountains, display fountains and Vaux designed benches. The current park music series known as Summerstage, which now calls the Rumsey Playfield its home, originated at the Bandshell and moved only when its popularity had outgrown the confines of the Concert Ground.

Still, the Bandshell stands as a cultural icon near the very center of the park. It has enthralled, and even astonished, generations of park goers with its variety and breadth of performance fare. From jazz to classical, modern dance to opera, band music to rock and roll it has provided a home to a diversity of artistic expression that mirrors the passion and drive that created the city around it. Martin Luther King once stood upon its stage and John Lennon was eulogized from it. And current visitors can still thrill to music on a summer’s evening, relaxing in the leafy confines, finding an aural, as well as visual, refuge from the city.

Central Park - the Heart of the New York City! #CentralPark

Egret gracefully taking flight from the Pond in #C