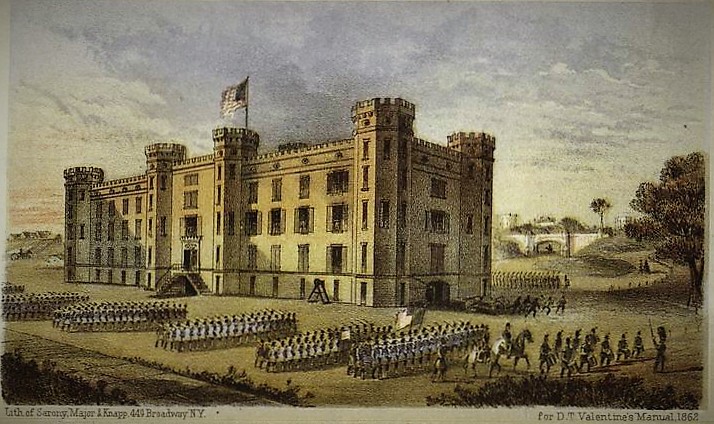 Originally designed to resemble a medieval castle, The Arsenal, located at 64th St. and Fifth Ave. is the second oldest building in Central Park, (the oldest being the Block House constructed in 1812 and tucked away in the northern reaches of the park). It was built between 1847 and 1851 and was originally designed by Architect Martin E. Thompson as a munitions depot for New York State’s National Guard. It was considered at the time to be an ideally strategic position to deploy troops to the city, or to either shoreline. Despite not being included in the original plans for the park, and its numerous critics, the building has been made useful in a variety of ways over the last 160 years. At various times it has been employed as a police precinct, a museum (the precursor to the American Museum of Natural History), a weather bureau and an art gallery. It also served as a makeshift zoo until 1871. Taken over by public works czar Robert Moses in 1934 it was converted into his command center and remains the office of the Parks Commissioner to this day.

Today, besides housing New York City Department of Parks and Recreation and the Central Park Wildlife Conservation Center, the Arsenal is also the home of the “Greensward Plan.” This is the original blueprint for Central Park authored by Frederick Law Olmsted and Calvert Vaux. Posted on the wall of a conference room it can be viewed by the general public when the chamber is not in use. Other attractions that draw visitors to the landmark structure include the lobby murals, painted by WPA artist Allan Saalburg, that depict a montage of park scenes and troops in military formation and the painted white “muskets” that support the stairway railing.

The Arsenal has happily survived numerous attempts at demolition throughout its history simply because it was too useful. Thereby proving once again that in New York City the only thing that trumps aesthetics is convenience.