On the Metropolitan Transportation Authority’s map that showcases the new Second Avenue line, Q trains now travel along northeast Manhattan instead of traveling to Astoria.  Mike Murphy, writing for Quartz, noticed an area of the Q train that will now run beneath the park and questioned whether or not the tunnel was new construction. MTA explained it was an existing tunnel that has appeared on past maps before. 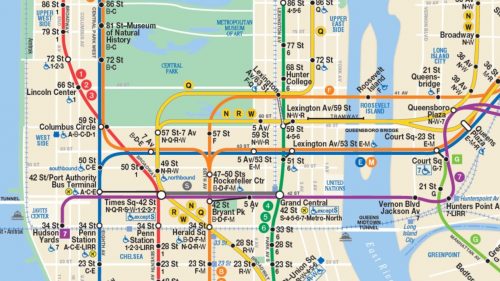 Archival maps featuring the New York subway system have shown this vanishing tunnel twice: during the winter of 1998 and in the summer of 1995. In both instances the tunnel was used as a temporary reroute for the Q train during construction. After construction was complete, the shadow tunnel faded off the map.

The tunnel was originally part of a plan in the 1970’s to construct a Second Avenue subway line and connects 57th street & 7th Avenue to 63rd St & Lexington will become a permanent on the MTA map by the end of 2016.  when heading North from 57th Street on the Q, R or N, you can try to catch a glimpse of the phantom underpass.