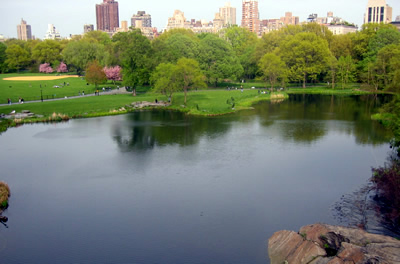 The Great Lawn in Central Park has, over the years, hosted some of the most popular musical events in the city’s history.

Besides hosting the New York Philharmonic  for two free performances every summer the area just north of Belvedere castle has been the stage for acts as diverse as Simon and Garfunkel and Pope John Paul II. It was even the site for the 1996 opening of the Disney Movie “Pocahantas”.

The Great Lawn actually holds the distinction of being the single largest design feature that was not part of the original Greensward Plan, as drawn up by Olmsted and Vaux. At that time it was the site of the Croton Reservoir, which had been built in 1842 and required the designers fit their vision for the park around its disconcertingly rectangular dimensions. In 1917 the reservoir was made obsolete by the construction of new water tunnel. Similar to the debate that now ensues over the future use of the current Reservoir, the Croton Reservoir was also the topic of much discussion. It was drained and filled in and was, for a period during the Great Depression, the site of a community of displaced people, then known as Hoovervilles. Finally it was planted with grass and became The Great Lawn. A subsequent controversy arose over the construction of ball fields. As usual the debate centered around the park being a natural refuge from the urban confines surrounding it versus its use as a playground for those who didn’t have access to other facilities, most notably summer houses near the beach. Finally the city installed eight permanent backstops in the 1950s.

However the lawn had never been designed with this amount of use in mind. By the 1980s the Great Lawn could just as easily have been described as the Great Dustbowl. Overuse had all but obliterated the grass and the earth was as hard packed as asphalt. Finally the entire space went through an extensive renovation in the mid-90s and has been rigidly overseen ever since to prevent the same abuses from taking place.  Also a favorite place to play frisbee.

The one thing that has not changed, and hopefully never will, is the magic of hearing a live symphony orchestra while staring up blissfully into the depths of a summer night’s sky.