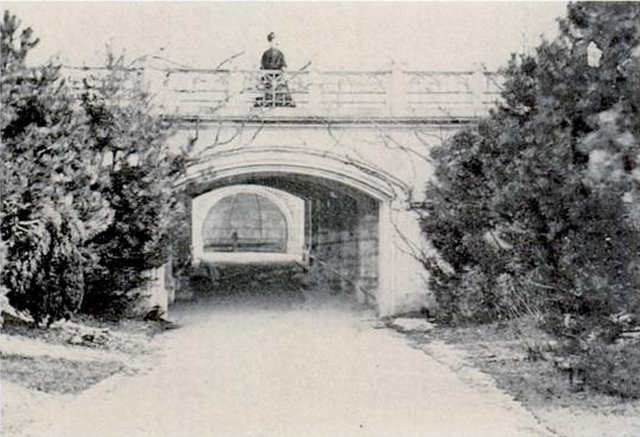 Marble Arch – loveliest of the “Lost Bridges of Central Park“. It was once located at the latitude of 66th Street, providing a crossing under the Drive, with a stairway up to the southern entrance of the Mall. It was demolished in 1938, a victim of Robert Moses’ automobile-centric vision of  20th century New York City.

Clarence Cook wrote of this graceful underpass in A Description of the New York Central Park, published in 1869:

This is one of the pleasantest and most elegantly built of all these cool places for rest and refreshment. It is entered at one end of a level with a foot path; at the other a double stairway to the left and right leads to the level of the Mall and to the carriage-road which this archway is designed to carry. It is called the marble archway to distinguish it, all other structures of this sort in the Park being built either of stone, or brick, or of brick and stone combined. The marble employed is the coarse limestone from the Westchester quarries. . . . A marble bench runs along each side, and at the end . . . a semicircular niche accommodates those who prefer the fuller light that reaches from the stairway. In this niche there is to be placed a suitable marble basin with drinking cups, but, present water is obtained from a common hydrant. The interior of this archway is peculiarly light and attractive, and far more cheerful than other structures of a similar sort in the Park. Here, on a warm day, the children and their nurses gather with their luncheon-baskets, or the reader with his book and sandwich.

Marble is a stone subject to erosion with time. But neglect and new priorities were more to blame — if in fact the archway was in bad condition — when it was demolished.

Marble Arch was found to be obsolete when the plan of the Center Drive and the East Drive was realigned for speedier automobile traffic. The arch was collapsed and is presumed to still exist beneath the ground. The precise location is known but, to date, no archaeological effort has yet been made to unearth it.

Marble Arch exemplified another functional purpose of the many pedestrian arches in Central Park — that of a shelter. Somewhat similar to Willowdell Arch, Marble Arch had continuous benches on both sides and a drinking fountain. Its freer detail reflected a similarity with the aesthetically complete interiors and ceilings of some bridges and archways, most notable among them the Terrace Bridge.

Marble Arch was the only archway built of marble in Central Park. Its demolition was unnecessary. It must be remembered that the 1930s, and for several decades after, was very much an era of tearing down and building anew.

Parks Department policy reflected the era’s outlook. In the 1930s, with the ever-increasing number of cars, the drives were straightened in various places. Marble Arch fell victim to fashion. Today, preservation is a force. Were Marble Arch still extant, it would be preserved.

From “Bridges of Central Park”