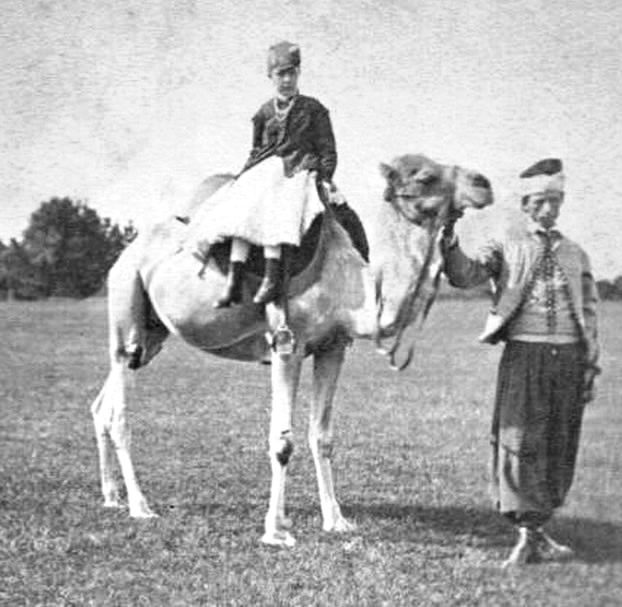 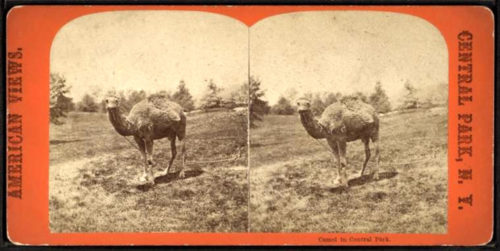 Perusing our archive of Central Park Stereopticon pictures recently I came across this singular photo of a camel, seeming quite relaxed on a stroll through Central Park.  As part of the park’s menagerie (which later became the Central Park Zoo), camels visited Sheep Meadow periodically. This particular camel appears to be roaming the park quite freely. Camels were popular at the menagerie, and they got lots of attention in the press; newspapers updated New Yorkers on when new camels came to the park, when a baby camel was born, and when a beloved camel died as evidenced by this brief, but poignant, notice in the NY Times:

“VOLSTEAD, ZOO CAMEL, DIES
Grief of Mate and Offsprlng Acute – Museum Declines Carcass
Volstead, the 14-year-old Bactrian camel who had long figured as one of the chief attractions at the Cen­tral Park Zoo, died yesterday after four days’ illness. Volstead, who was born in the zoo here, was the last of the male camels of the Central Park herd. He is survived by his mate, Jeanette, and an 11-months-old offspring, Jeanette 2nd. The grief of the survivors was described by Head Keeper Robert Hurton as acute.
The Museum of Natural History having declined to accept Volstead’s carcass, the camel will be buried at Barren Island.”
Published: May 23, 1930 Copyright © The New York Times

I think my favorite part of the whole camel saga was the name “Volstead”. This was thanks to the efforts of the aforementioned Robert Hurton, known around the Menagerie as “Bob the Moniker King”. Besides his sensitivity to the bereavement of the Volstead clan his finest moment might have come in the services of “Tiny” the Hippo. While he may not have displayed exceptional talent in nicknaming this particular charge he did perform nobly in the matchmaking department. As reported by the NY Times Mr. Hurton noticed that Tiny seemed apparently lonely and actually had a suitable mate sent all the way from Hamburg, Germany.

They were also apparently employed as part of the ongoing landscaping efforts: 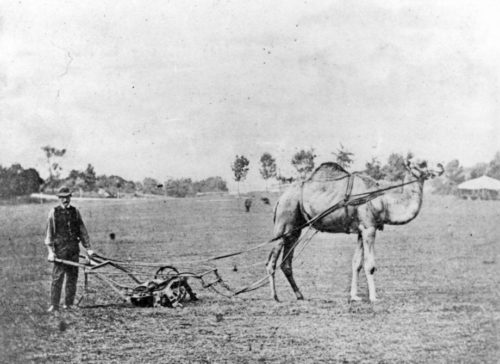 And as a special ride attraction on Sheep Meadow. 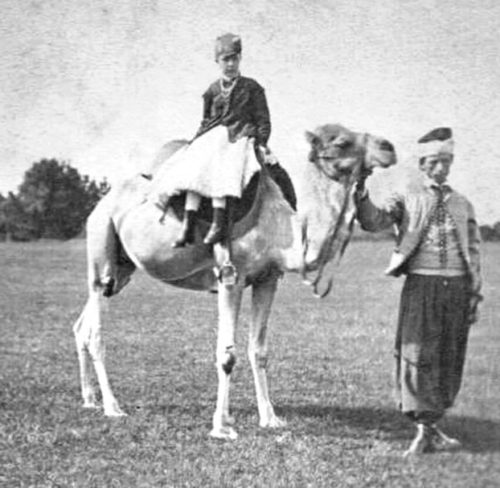