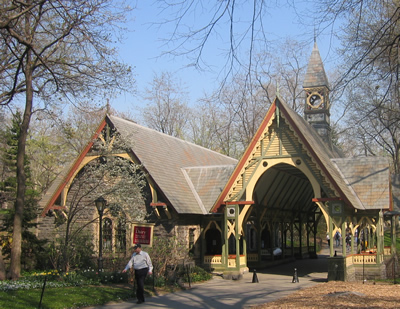 At its inception, the southern portion of Central Park was considered by designers Olmsted and Vaux as the Children’s District. This was because it was the first area of the park that would be reached by families traveling from the heart of the city, most of which lay below 38th St.  At that time, one of the critical needs of children was for fresh milk.  Unfortunatly, a series of scandals and cholera outbreaks placed the dairy production of the city under a cloud of suspicion. To lift suspicion and fulfill the dairy needs of the people, the city provided place where families could find a ready supply of fresh milk when traveling to the park.  Thus, the dairy was built.

The building itself, designed by Vaux and erected in 1870, is a whimsical combination of architectural styles that has been characterized as Victorian Gothic. Half of the Dairy consists of a roofed open gallery, or loggia, made of wood with geometric gingerbread borders. The other half is a granite structure with window treatments and gambrel roof that resembles nothing so much as a country church. The loggia was designed to catch the cool summer breezes that blow across the Pond and to retain as much warmth from the winter sunlight as was possible. When it was built the dairy was designed to provide a view of the Pond, but now it gives visitors a lovely view of Wollman Rink, framed by the skyscrapers in the background.

Today, the Dairy serves as a general visitor center and provides the public with information on the design of Central Park, current park events and programs. A new feature is an interactive touch-screen kiosk providing general information about the park. It was specially designed with children in mind, but the information is valuable to all. In addition, The Dairy serves as the official Central Park gift store with maps, guides, history books, and a line of mugs, key chains, T-shirts, and caps especially designed for the Central Park Conservancy.