While Central Park offers a welcome respite all year round from the surrounding cacophony of urban life, it is during the springtime that the park really sparkles.  Starting at the middle of March, sometimes before the snows of winter have even completely disappeared, you can find snowdrops and crocuses poking up between the leaves and tree roots.  These are soon followed by daffodils and tulips as the entire park erupts in a fragrant display of early flowering pastels.  By mid April the Central Park landscape is awash in cherry blossoms and magnolia flowers that signal the completed transformation from dreary winter to spring celebration.  Here is a countdown of my picks for the ten very best places in the park to view this amazing floral display.

10. Lilac Walk
Tulips in Conservatory GardenOne of the lesser known delights of Central Park is a pathway that runs along the north side of the Sheep Meadow to the Mineral Springs refreshment stand.  It is the called the Lilac Walk  and it is home to more than twenty varieties of purple, pink and white lilac blossoms from around the world.  The selections includes the Dutch Syringa vulgaris as well as the Southeast European and American varieties. Hybrids from the United States and France have also been planted and all are skillfully and creatively presented by skilled gardeners to the delight of all who walk along this path. There are even varieties from Canada and China.  When these lilacs blossom, their intense fragrance is quite demanding and few who pass this way can ignore the theater of aroma that envelops them.  Created in 1970, the Lilac Walk was conceived and financed by philanthropist Nell Singer.  It is bordered on the south by a fence which features the crawling vines of clematis and morning.  By late spring the fragrance exuded by the purple, pink and white blossoms is almost intoxicating.

9. Kwanzan Cherry Trees – West side of the Reservoir
In Central Park, the Kwanzan Cherry blooms in early May, shortly after the Yoshino Cherry Trees, which are on the east side of the Reservoir.  An ornamental cherry tree from Japan that is admired for its double-petal flowers and bright pink blossoms, it does not have the delicate appearance of the Yoshino, but it is still extremely attractive in its own strikingly colorful way.  It also contributes a certain dramatic consistency to the scenic narrative of the Reservoir panorama.  The cherry blossoms on the west side blossom almost immediately after the ones on the east side are gone.  This extends the spring blooming season around the  106 acre body of water for another two weeks and gives visitors, especially the runners that use the surrounding track for training, almost an entire month to enjoy the spectacle of the delicately flowering trees.

8. The Pond
The Pond provides immediate relief from the hustle and bustle of the city just outside. This is due to a veritable wall of trees and shrubs, as well as the inspired landscaping of Olmsted and Vaux, which placed the pond below street level. This entrance was originally designed to handle most of the traffic into the park, and continues to do so until this day.  In spring time it offers an even starker contrast as the park goer walks down the stairs and along the placid waters. Looking across you can see Gapstow Bridge and the surrounding shoreline, which features some of the earliest blooming seasonal arrivals. Crocuses, daffodils, foam flowers, forsythia, and tulips decorate the pathways and within seconds visitors are transported far away from Fifth Ave and Grand Army Plaza. 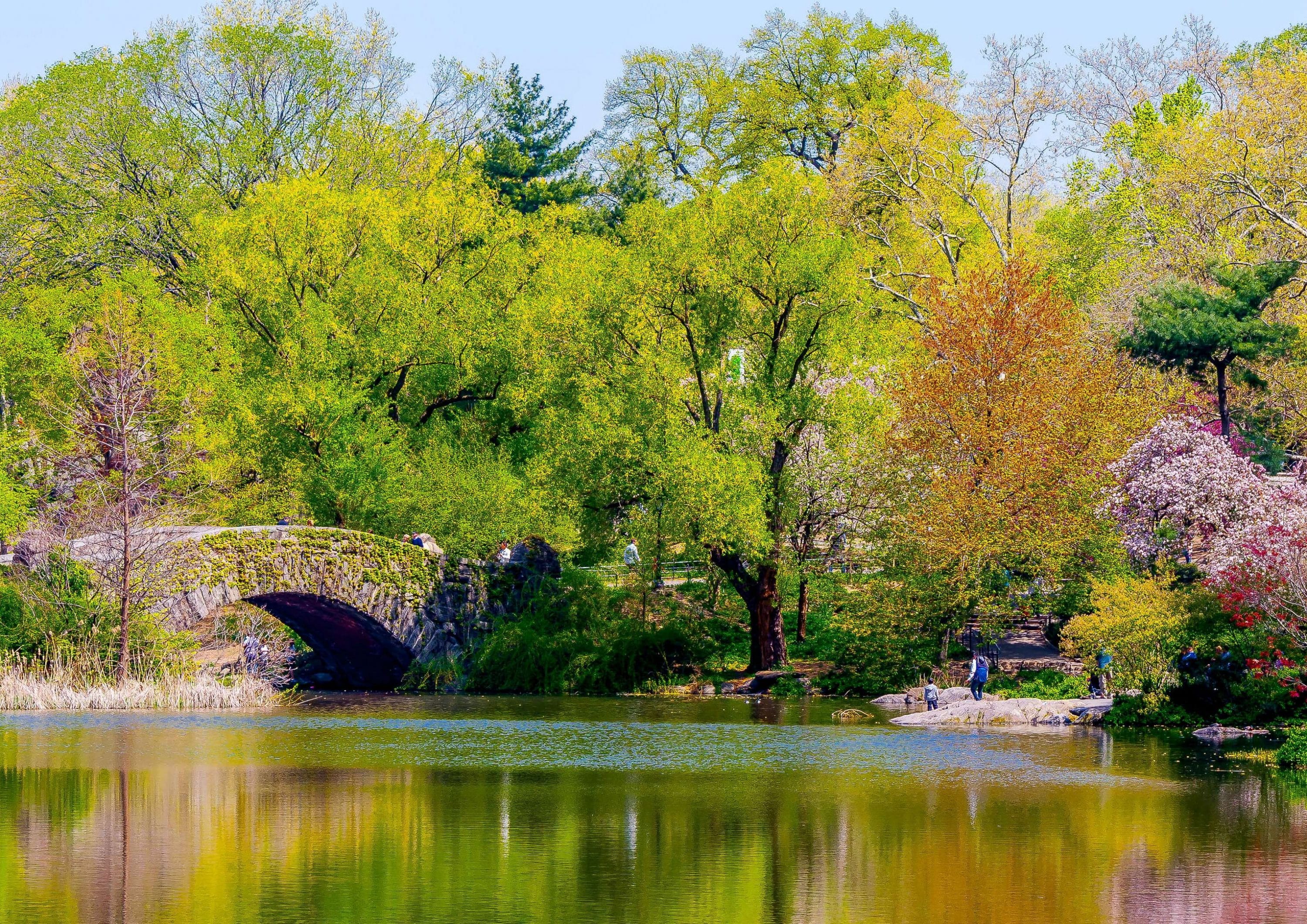 7. Shakespeare Garden
Nestled between Belvedere Castle and The Swedish Cottage the garden first came into existence in 1913. Known as the Garden of the Heart it was patterned after Victorian era rock gardens. Then, in 1916, to celebrate the tercentennial of Shakespeare’s death, it was rechristened in honor of the Bard and only plants mentioned in his plays were planted there. These include columbine, primrose, wormwood, quince, lark’s heel, rue, eglantine, flax and cowslip, many of which sound as if they would be right at home boiling and bubbling in a cauldron.  The spring blossoming varieties to be found here include crabapple, fritillaria, grape hyacinth (muscari), magnolia, quince, and tulips.  The Shakespeare Garden is the perfect place to while away a timeless May afternoon.

6. Azalea Walk
There is another little known gem hidden in the Central Park landscape that comes to life each spring.  It is a short walkway just south of the Eaglevale Arch that features a delicate display of azaleas and rhododendrons. White, pink, orange and rose colored azaleas adorn this wood-chipped path, as it winds its way further south ending near Strawberry Fields.  Recently restored, this woodland area is lined with benches that are nestled amongst the azaleas making it a wonderful place to spend a quiet moment of reflection.  Azalea varieties range from the smooth azalea with white flowers, the Delaware Valley White, the Pinkster flowers, to the Swamp Azalea, also with white flowers. The Carolina Rhododendron adds pale rose flowers to the mix, as does the aptly-named Rosebay Rhododendron.  Other spring time blooms include daffodils, leucojums, scilla, and shadbush.

5. Yoshino Cherry Trees – East Side of the Reservoir
The Yoshino Cherry is the most common ornamental flowering cherry in Central Park and it can be found lining the east side of the Reservoir for several hundred yards.  It is one of the first signs of spring in the park, with the flowers appearing in mid- to late-April well before any of the other flowering trees and shrubs nearby.  There is always a magical span of a few days during which you can find the surrounding ground blanketed with pale pink flowers as each spring breeze brings another shower of feathery petals.  Some of the older specimens of Yoshino Cherries along the east side of the Reservoir may be the original trees presented as a gift to the United States by Japan in 1912.  This is truly one of the most beautiful spots in the park on a balmy May afternoon.

4. Conservatory Water
The area around the pond is home of some of the park’s loveliest foliage. These include Lebanon Cedars, willows, pine and beech trees. It also features the park’s largest display of spring blossoming Cherry Trees, besides the stands on either side of the reservoir.  Other April blossoms include crabapples, daffodils, grape hyacinth (muscari), shadbush, and tulips.  The surrounding benches are the perfect place for either a brief respite from your park sight-seeing tour or a more contemplative visit, relaxing while you watch the tiny white sails of model boats tacking against the breeze.  Nearby you can also find two of the Park’s most popular statues, especially with children. At the northern end is the sculpture of Alice, of Wonderland fame, with all her favorite tea party playmates, and at the western edge a statue of master story teller Hans Christian Andersen.  Conservatory Water is also the staging area for a dedicated group of bird watchers that have been tracking the life of Pale Male and his mate Lola, a pair of Hawks, that have made there home on a ledge on a nearby building.

3. Strawberry Fields
Strawberry Fields opened on October 9, 1985, John’s 45th birthday. Every October 9th since then has seen an all day vigil of people of all ages from around the world; fans of his music and believers in his vision.  The park was a favorite place for Lennon to take strolls with his family, with whom he lived in the Dakota Apartments, just across the street at 72nd and Central Park West.  The gentle slope directly behind the memorial is called Rose Hill for the rambling roses in the clefts of the bedrock. The eastern slope is a woodland popular with bird-watchers. In its center is the woodland wildflower meadow filled with Ostrich and Christmas Ferns and Virginia Bluebells.   In springtime it is populated with quince, scilla, shadbush and offers a beautifully secluded place to walk, just a few yards from the noisy city outside.

2. Wisteria Pergola
The Wisteria Pergola overlooks the north end of the Central Park Mall just short of 72nd Street and the Terrace Bridge. Olmsted and Vaux, the Park’s designers, were surely inspired when they placed this long latticed patio, 130 feet long by 25 feet  wide, at this location in the Mall.  The long crossbeams and many wooden supports are laced with wisteria vines and in the spring they bloom gloriously with delicate pale lavender flowers, which almost overwhelm the senses with their intoxicating aroma.  Just a few yards to the east is the SummerStage concert area a performance venue used throughout the summer months.  In the thirties it was the site of the Central Park Casino, the hottest nightclub in Central Park and the clubhouse of then Mayor Jimmy Walker.  Though the view of the Mall is now obscured by the Bandshell it is still an enchanting place to stop for a rest or some peaceful contemplation.

1. Conservatory Garden
One of the hidden wonders of Central Park is the Conservatory Garden at Fifth Avenue and 105th St. A secluded oasis, just a few steps down from one of the City’s busiest thoroughfares; the garden offers a fragrant respite from the gasp and clatter of the urban afternoon. The Conservatory Garden is filled with a myriad of plant life, from carefully cultivated heirloom roses to the most common of indigenous flowers, while portions of the grounds are delineated by hedges of English yew, barberry, Korean holly and the serendipitously named “Manhattan.” The Garden itself is divided into three distinct sections, each representing its own specific style. These are the north (or French Garden), the Central (or Italian Garden) and the south (or English Garden).
The southern garden features the English style and as such is much less formal than the other two. It is planted to be enjoyed the year round and almost every week there are new blooms to admire, but it is in the springtime that it really shines. At the center is a bronze sculpture, the Burnett Fountain, depicting a young boy and girl. Based on characters from The Secret Garden, by Frances Hodgson Burnett the fountain was designed and constructed in 1936 by Bessie Potter Vonnoh. It is surrounded by a reflecting pool upon which float hundreds of water lilies and in which swim dozens of extremely sophisticated goldfish (don’t forget the address). The surrounding spring blooms include brunnera, cornelian cherrys, crabapples, daffodils, forsythia, grape hyacinth, korean spice, magnolias, pansies, quince, summer snowflakes, tulips, virginia bluebells and witchhazel. It is this amazing diversity of flowers, along with the secluded tranquility of the grounds themselves that makes Conservatory Garden the very best place in Central Park to enjoy the blossoming splendor of springtime.

Kwanzan Cherry Trees - West side of the Reservoir